I am with lyn, where are all the EOMEOTE entries, I couldnt let her entry suffer alone? So here is my slightly different interpretation.... 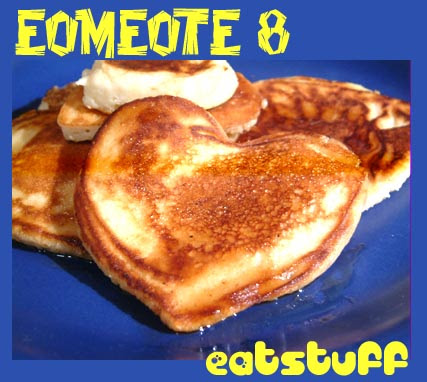 The story of how egg saved the day.

It had been a long week, and an even longer night. They should have known better than to play the Iron Chef drinking game. Even though they had only had shots of port, it had still gotten really really messy.

But dear reader she had forgotten that they needed to go shopping, so there was no bread, non bacon, no orange juice, no milk and only 1 egg.

OH NO! she cried! how can I make a nice greasy breakfast to soothe our aching heads and stomachs and our serious desire for some eggs and bread with only 1 egg. Some time passed and after a few glasses of water her head started to clear. Yes, Yes thats it I've got it! Buttermilk Pancakes! There is an egg there is some flour so it is like eggy bread! That will do it. 1 egg, 1 cup of buttermilk 1 cup of flour 1/2 tsp of salt, baking powder and bi carb soda. Beat it all together. Fry. Maple Syrup. *sigh* Done. The lone egg could still save the day.

So she took the buttermilk pancakes to the boy and he began to eat and all started to became good in the world. Except for the little grey kitty who felt even hungrier than before as he had been completly forgotten about. Run run run Jump boing boing. Right into the plate of Buttermilk pancakes.

*No grey kitties or plates of delicious buttermilk pancakes were harmed in the making of this terrible short dramatic work*
Posted by eat stuff at Friday, July 01, 2005

Pancakes save the day! I'm hearing the plot for a children's book, Clare!

I also looked for posts for EoMEoTe # 8. Maybe everyone is egged out since the IMMB eggs event.

Hi Sylvie They must be :)

Soon soon people, dunno what Jeanne's up to, I think she's over memed.

There'll be something soon, I'm sure, I'm sure. I've got writers block or something. Eggs are hard but writing is harder. Hmmm good good, now let me see...
My my Lady Sugden these boiled eggs are hard.
Not as hard as writing I hear my dear Clarence.
[together]Ohhhahahahaha

LOL Clare,
You crack me up! So sick and yet you still made adorable heart shaped pancakes! :)

Hi Anthony
I am roflmfao! Ohahahahaha

My My clarence what did you do? Me Lady Sugden? It was not me! These eggs are as ripe and over the hill as your writing!

I am so glad I made you laugh.. but what makes you think it is true? Or is it? lol

How on earth did you make heartshaped pancakes?